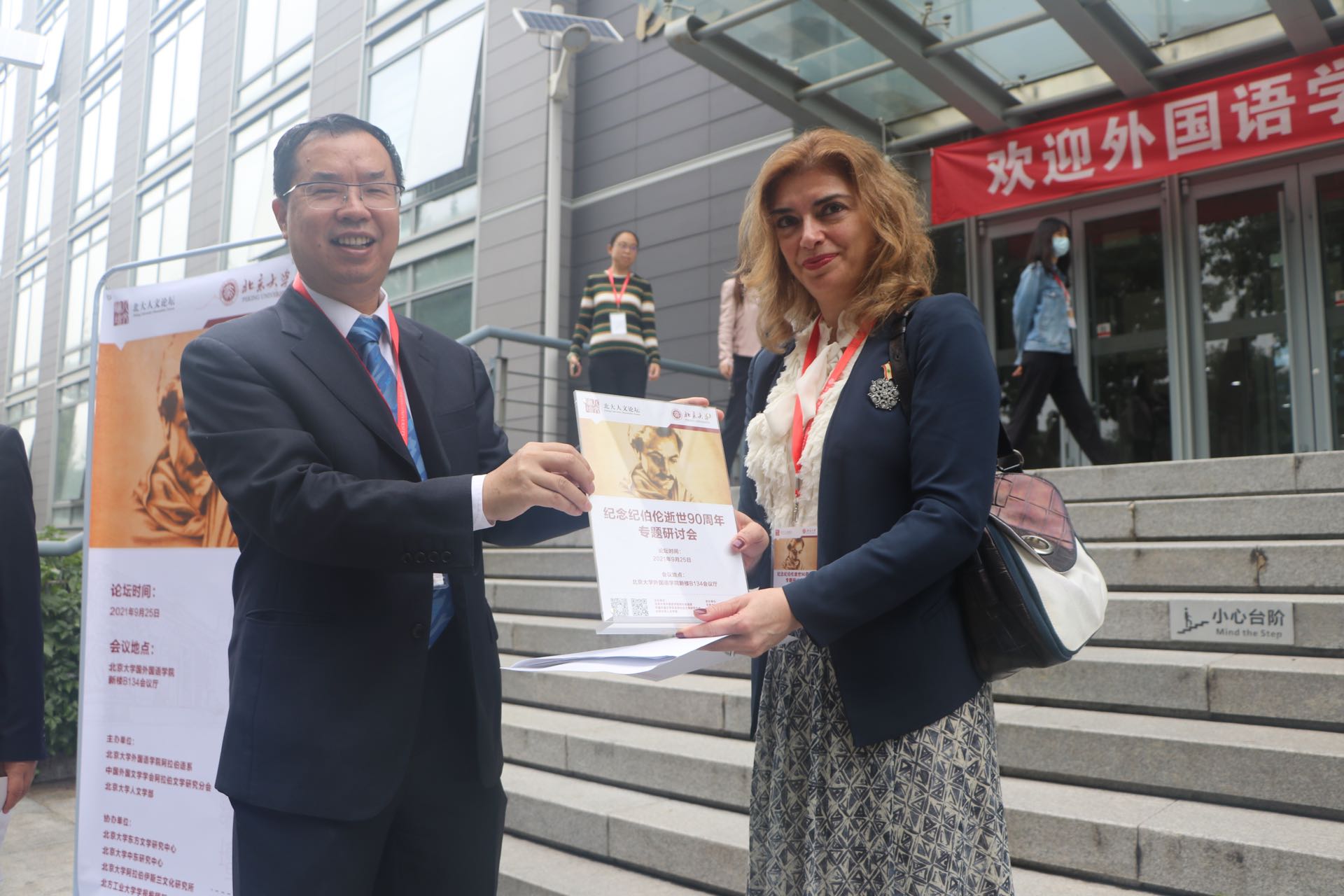 The Ambassador of Lebanon in China Milia Jabbour and Professor Lin Fengmin, the president of the Association of Arab Literature in China

Professor Lin Fengmin, the head of the Association of Arab Literature in China and the Department of Arabic Language & Literature at Peking University, spotlighted Gibran's revolutionary and life aspirations as one of the Arab immigrant writers. Professor Chenming, the director of the Research Center of Eastern Literature at Peking University, commended the essence of humanity, the implications of the eastern spirit, and the social significance of Gibran's literature under the influences of Arab tradition and western culture. Professor Fu Zhiming, the vice dean of the College of the Foreign Language & Literature at Peking University, shared his personal experience with Gibran's work and summarized the Lebanese studies in Chinese scholarship and the cultural exchange activities between Lebanon and Peking University. At the end of the opening ceremony, The Ambassador Milia Jabbour praised Gibran as a world citizen and his impacts beyond the boundary of east and west. She highlighted the necessity of re-reading Gibran's literary heritage to bridge east and west and construct a more inclusive and humanistic world in an age of global conflicts.

The seminar was divided into four sessions in discussing Gibran's literary and artistic works comprehensively and intensively. The diverse perspectives and inquiries into Gibran's literary and artistic works in respect to the renovate thoughts, revolutionary spirit, and literary power deepened the understanding of Gibran's creation and enriched Arab literary studies in China. In a broader scope of world literary studies, the seminar had academic and realistic significance. 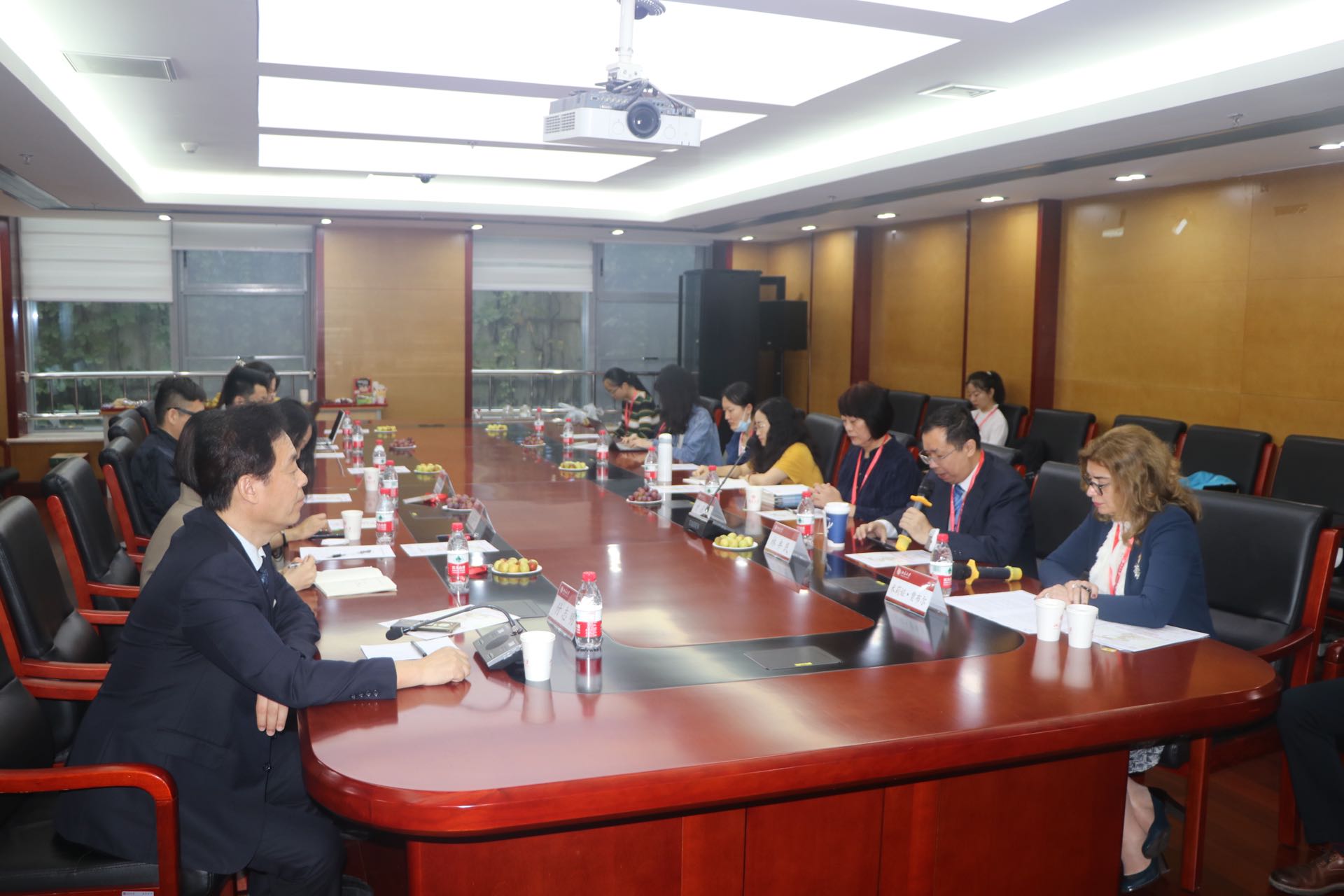 In the first session, Professors Ge Tieying in UIBE and Gan Lijuan in TNU reviewed the evolutionary receptions of Gibran in China. Based on the historical exploration in the early stage of the Chinese translation of Gibran's literary creations, Professor Ge argued that the resistance to the old system and pursuit in progress implied in Gibran's works provided spiritual resources in spreading revolutionary thoughts among Chinese readers. In a report "The Spread and Influences of Gibran in China: Gap and Reflection," Professor Gan Lijuan pointed out that the scholarly research and biographical translation are insufficient compared to the enthusiasm of translation and publication of Gibran's literary works. She suggested that the Chinese scholarship of Gibran requires to be developed as the Chinese reality changes. Professor Zhang Hongyi in Middle Eastern Studies of Beijing International Studies University (BISU) discussed the philosophical explorations of life and the complex relations between individuals and society in Gibran's literary and artistic works based on her visiting experiences in Gibran's childhood residence and commemorative museum.

In the second session, Professor Xue Qingguo in BFSU highlighted the contemporary and eternal significance of the prophetic thoughts of Gibran on human unity, literary creation, political systems, and the harmony of humans and nature. In the presentation "Seeds of God - Gibran and Modernity of Arabic Literature," Professor Zou Lanfang in UIBE analyzed how Gibran's literary works led to the formation of modernity of Arabic literature by focusing on the poetic language of Gibran and interpreting its lyrical and revolutionary features.

In the third session, exemplified by "On Children" and "On Marriage" in The Prophet, Professor Lin Fengmin discussed the great foresight in Gibran's literary works and its guidance in people's lives. Dr. Linzhe in UIBE presented ‘"he Multi-Cultural Integration in the Early Arab American Literature" to discuss the connections between the renaissance of Arabic literature and east-west cross-cultural exchange. Dr. Lu Yiwei in SISU presented "A Gibran study in the lens of diasporic literature" to explore how diasporic writers constructed unique cultural identification based on the reflection of Arabic tradition and western modernity. In the presentation "Gibran and Linguistic Renovation of Arabic World," Dr. Lian Chaoqun in PKU discussed the linguistic renovation of Gibran's literary works and the construction of Arab national identity in the period of the Arabic Literary Renaissance. 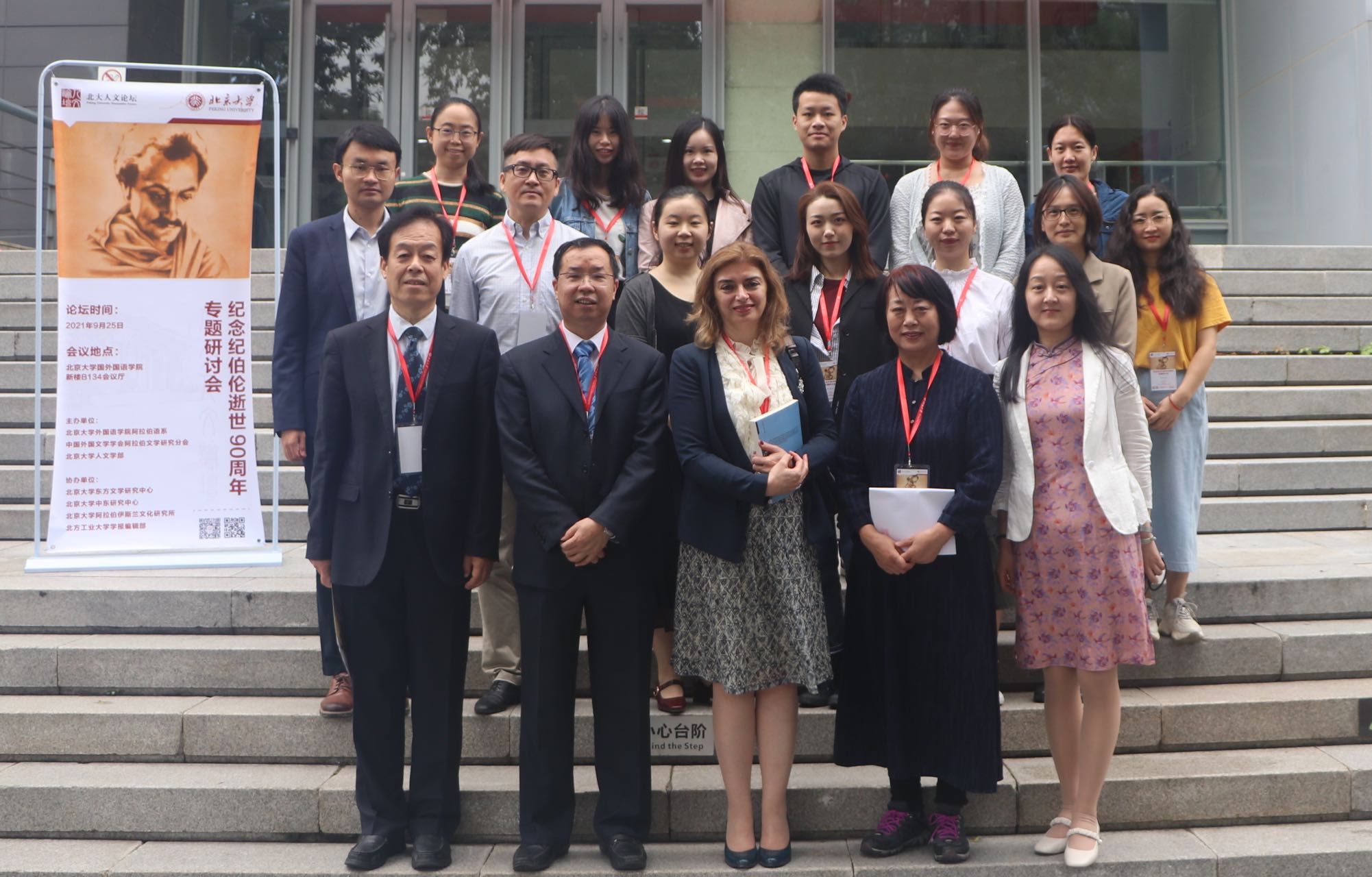 Attendees in the seminar

Illustrated by the translation of The Prophet, Gao Suqin in SISU proposed that translation should be based on thoughts. The implied wisdom can be conveyed through translation only when the thoughts behind language are comprehended. Mi Jichao in Guangdong University of Foreign Studies (GDUFS) presented "The Anti-Slavery Thoughts of Gibran in the Arabic language style - the Case of The Grave-Digger" to discuss the thoughts of resistance and anti-slavery in the lens of language tradition. Wangfang, a graduate student in TNU, presented "The 'Self' Exploration in Gibran's Literary Works." Wangfang argued that Gibran consciously explored the motif of 'self' in his different stages of the creation concerning the lack of people's self-consciousness. In the presentation "A Mother Carrying Forward - A Study of Thoughts in the Early Literary works of Gibran," Li Pei in Dalian University of Foreign Language (DLUFL) discussed the evolution of the author's thoughts and its real dynamics through three images in Gibran's literary works. Wang Hongbo, the director of the Editorial Board of the Journal of North China University of Technology (NCUT), proposed that the inclusion of external factors such as market, reader's reception, and historical documentation and studies is needed in understanding classic writers. Dr. Wang believed that the discussion of these external factors besides the text analysis can enrich the theoretical construction.

During the seminar, Haoping and Wangbo, the president and vice president of the PKU met the Ambassador Milia Jabbour. President Haoping welcomed the Ambassador and referred to the long exchange history between China and Lebanon. Under the frames of "One Belt, One Road Initiative," the mutual cooperation will be continued. As a leading university in China, PKU will facilitate the cultural and academic exchange and higher education cooperation between Chinese and Lebanese universities and promote the development of the Department of Arabic Language & Literature at PKU. Ambassador Milia Jabbour expressed her sincere appreciation for PKU's hosting and long-term support in cultural exchange and dialogue. She looked forward to initiating, consolidating, and pushing further cooperation with PKU in the future. 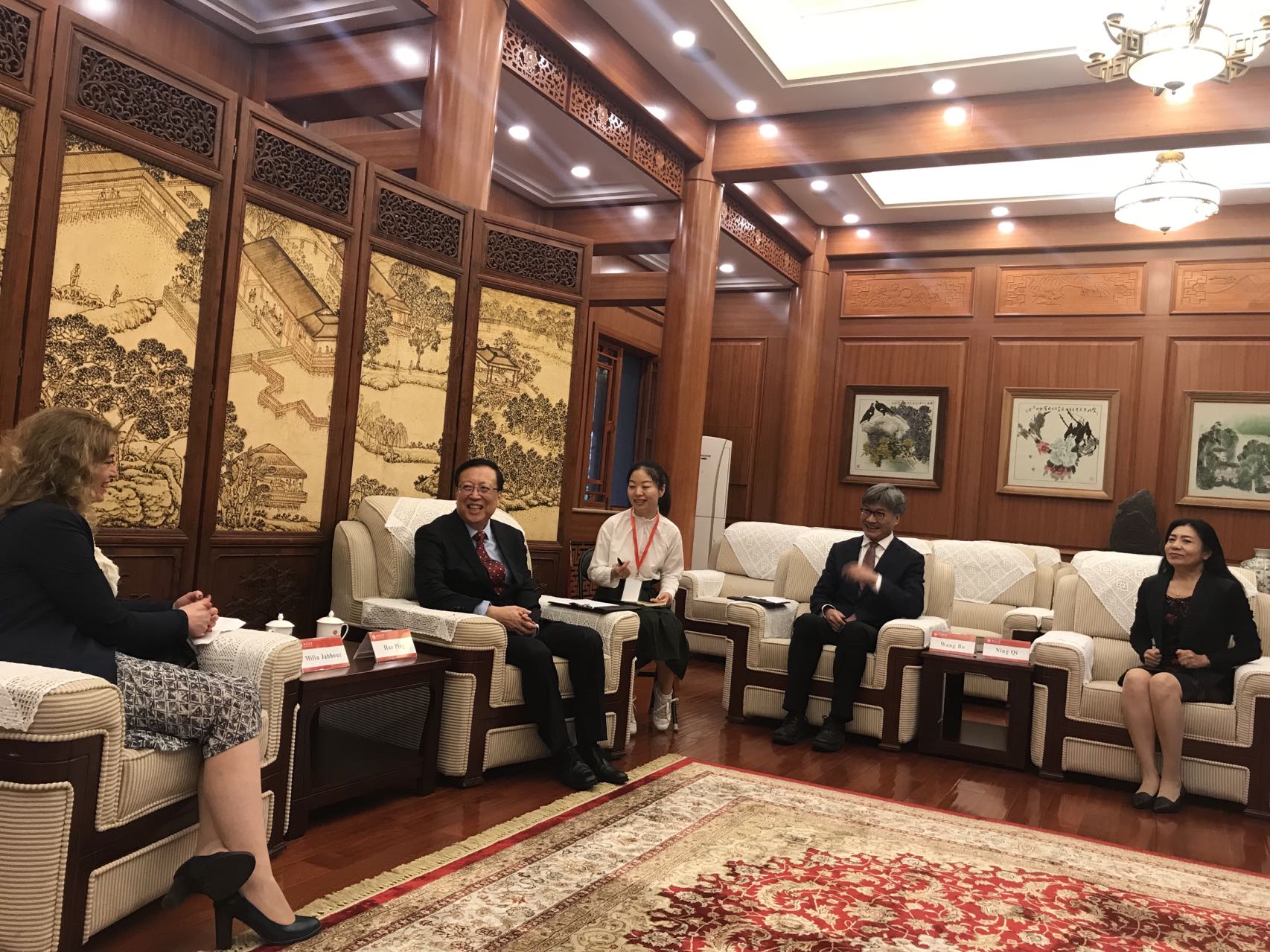 The president and vice president of Peking University met Milia Jabbour, the Ambassador of Lebanon in China