“Mrs. Ford is one of the powerful women of New York […]. Last Sunday she took me in her car to her great country house in Rye, N.Y.” wrote Gibran to Mary Haskell in 1913. And again, one year after: “We had a dinner with the Fords. I enjoyed the evening very much – such rare people.”[1] 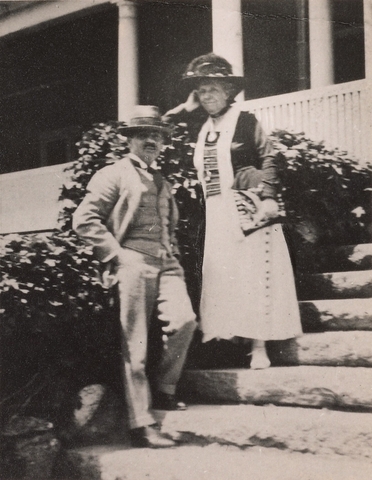 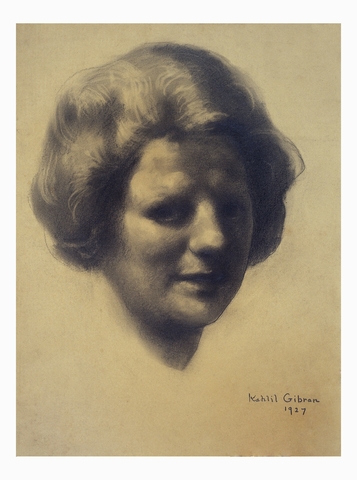 In Mrs. Ford’s wide circle of acquaintances there was also a well-known Indian lecturer on Middle Eastern politics, Syud Hossain (1888-1949), who in 1925 invited Gibran to join the board of the New Orient Society in New York and to become one of the regular contributors to The New Orient (1923-1927), a quarterly magazine seeking to encourage the meeting of East and West and of which he was editor. It is very probable that Gibran, who always accepted Mrs. Ford’s invitations to stay at her country summer house in Rye, New York, about ten miles north of the Bronx,[3] met Hossain just there. The two men’s mutual frequentation of Julia Ellsworth

Ford is testified by an undated photograph, exhibited in the Soumaya Museum, Mexico City, which portrays them with her in Rye. Currently the Julia Ellsworth Ford Papers collection is property of the Beinecke Rare Book and Manuscript Library, Yale University. It consists of correspondence, writings, scrapbooks, printed material, photographs and other papers documenting aspects of her life and work, and her relationships with literary and artistic figures of the early 20th century. Said collection also includes the same mentioned picture kept by the Soumaya Museum, or better, one of its copies owned by Mrs. Ford with some handwritten annotations by her: 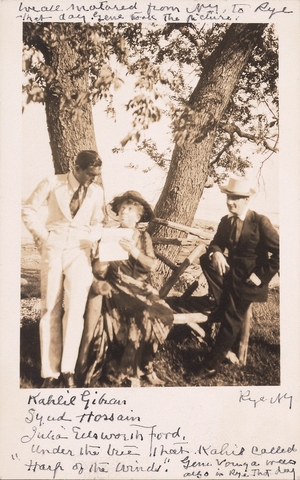 We all motored from NY to Rye that day. Gene took the picture.

Under the tree that Kahlil called “Harp of the Winds.”

The collection also includes another hitherto unknown photograph, probably dating back some years before the one with Hossain, which portrays only Mrs. Ford and Gibran in an undetermined place, both posing smiling, standing outdoors on a sunny day at the stairs leading to the veranda of a house.[5]

[2] Nina Wilcox Putnam, Laughing Through: Being the Autobiographical Story of a Girl who Made Her Way, New York: Sears publishing Company, Incorporated, 1930, p. 213.

[3] Cf. Salim Mujais, The Face of the Prophet: Kahlil Gibran and the Portraits of the Temple of Arts, Beirut: Kutub, 2011, p. 29: “My dear Mrs. Ford: I wish I could tell you how much I have enjoined each and every one of your Friday dinners. Indeed they were unique and enchanting. […] Whenever it is possible I shall be only too happy to come and share with the others the charm of your friendship and the delight of your enthusiasm.”