Gibran in the First Issue of Al-Funoon

The Arab-American literary monthly review Al-Funoon (“The Arts”) began publication in April 1913 in New York City by editor and publisher Nasib Aridah,[1] already founder there in 1912 of the “Al-Atlantic Publishing Co.” After 29 issues it ceased publication in August 1918 due to several factors, such as paper supply, lack of subscription payment, manpower availability and World War I.[2] 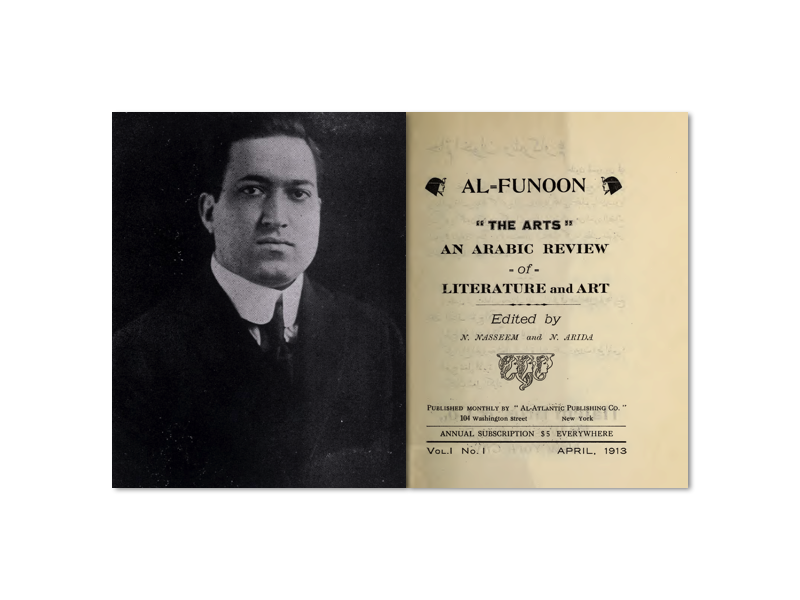 But Aridah’s magazine found many economic and logistic difficulties since the beginning, as testified for example by a 1913 letter from its editorial board to the New York City Post Office Master, of which we have an unsigned draft:

We applied lately for entering our magazine “Al-Funoon” as second class matter at the Post Office of this City.

Until then we did not know that it is necessary to show all applications for subscription, therefore, all we received up to that time were destroyed. We, however, have shown all received since applying.

We wish to call your attention to the fact that in our books very few subscriptions are marked “paid”, which is due to an old custom prevalent among Syrians to remit at the end of the subscription year.

We trust that we have satisfactorily explained all that might seem unusual. 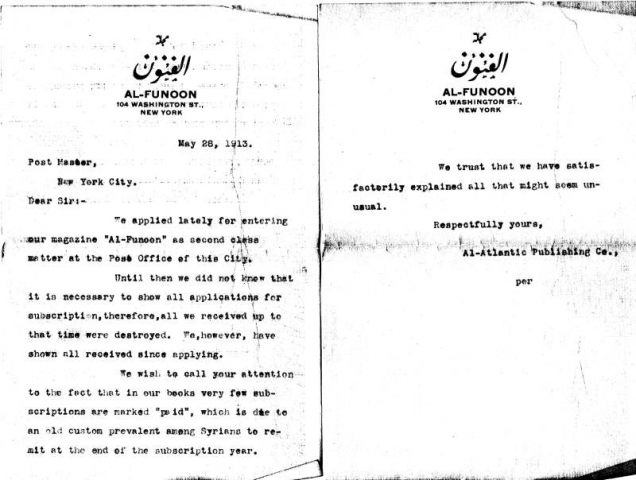 Gibran authored many relevant contributions in the journal, both as an artist and a poet, publishing several drawings and writings. Aridah’s deep respect for him is confirmed by the fact that the first issue of Al-Funoon dedicated its first pages to him through an original poem by him entitled Ayyuha al-Layl (transcribed into English by him as An Ode to the Night in the copy he sent to Mary Haskell)[4] and a full-page photograph of the poet himself. It was not an accidental circumstance, but a planned way to highlight Gibran’s name as the most renowned representative of the Mahjar literature. 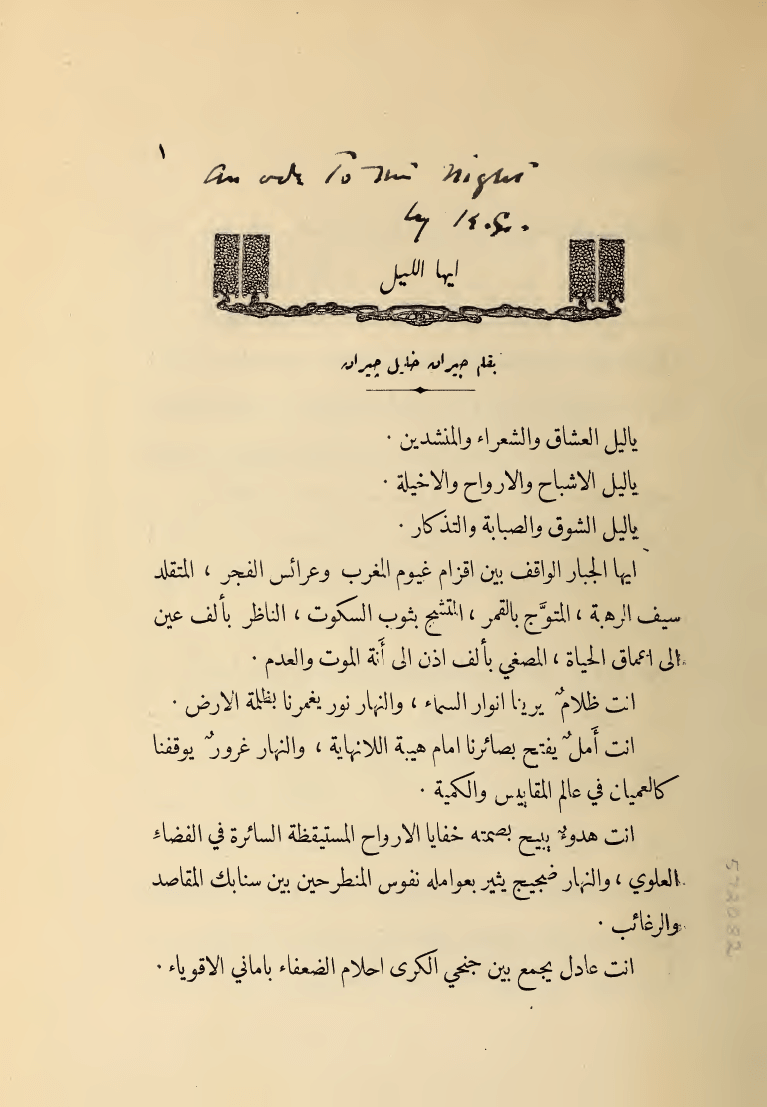 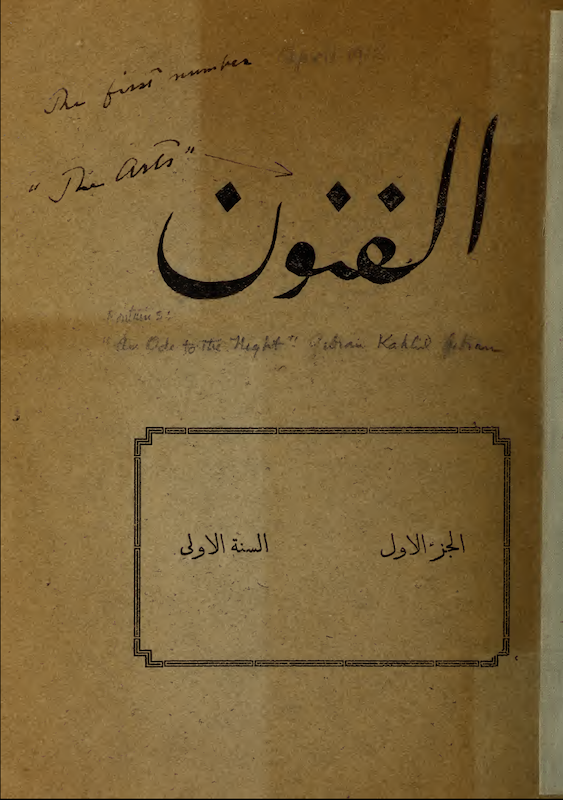 This is demonstrated also by an early two-page document in English, a sort of draft table of contents of the issue, probably typed by Aridah when his review was just an embryonic project:

AN ARABIC REVIEW OF LITERATURE AND ART.

Pictures in this Number, 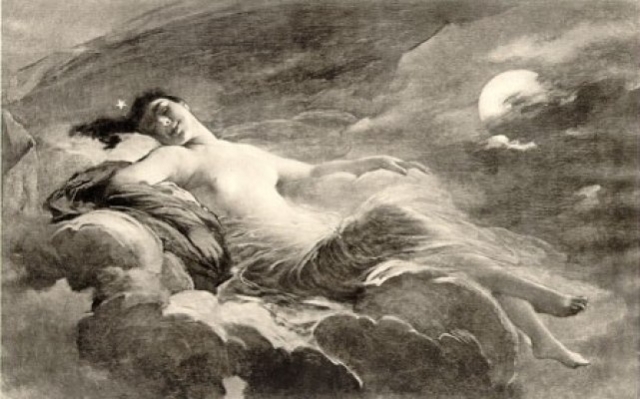 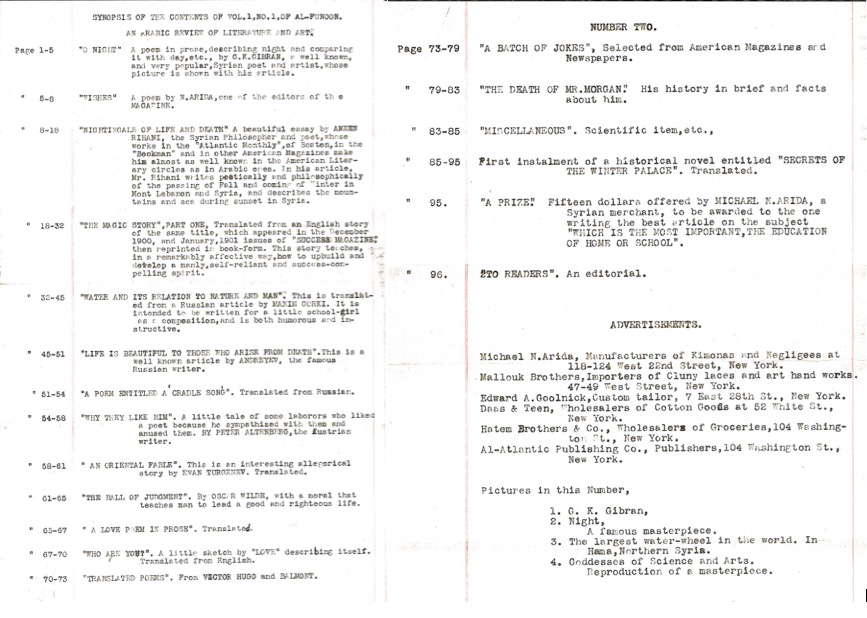 [1] Together with Nazmi Nasseem.

[4] See Mary Haskell’s personal copy of the issue given to her by Gibran (Mary Haskell Minis Collection, The University Library at the University of North Carolina at Chapel Hill).